So, yesterday I had a check-up with my liver doctor and they are finally going to start reducing my medicine. ( Collapse )

But something I thought was kind of weird on the health survey at the doctor’s…they asked if my sexual partners were ‘Male’ or ‘Female’. I thought, “Well, good for them for not assuming that just because I checked ‘Female’ for my own self that my partner would automatically be ‘Male’." However…what the hell does that have to do with anything? How is that a ‘health’ question? I was baffled. And then, the survey asked about my birth control and one of the options was ‘Not Sexually Active (Abstinence)’. I am ‘not sexually active’ but I’m not practicing abstinence! Isn’t there a box I can check for ‘can’t get laid to save my life!’ Bitches, please…abstinence…/scoff/.

Finally, my baby boy Roo, has an ulcer on his eye. An ulcer! Doesn’t that sound awful? My poor boy. The vet gave him eye drops and also other eye drops made out of his own blood. IKR? It’s like some sci-fi shit going on here. Apparently it has like his antibodies that he needs, but how weird that we have to syringe his blood from a little tube and then drip it in his eye. So far he has been very good about the whole thing. 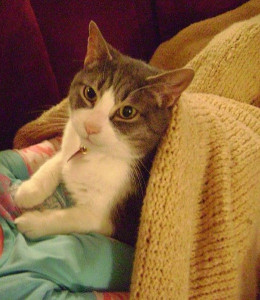 I love his big eyes.

That is all.
Collapse