I had to cover over our real life names in this pic, which were on the cake, but you get the idea! 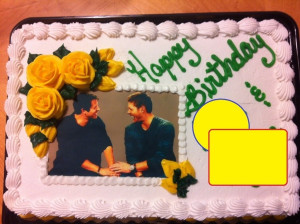 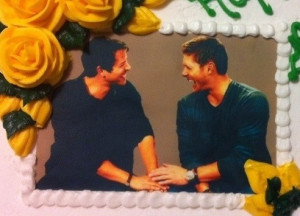 So it had our names on it and this photo of the boys that my sister actually took into the cake shop and had them put on the cake - (what a sister I have!) - and the girl behind the counter looks at it and says, "So...are they twins?" How's my sister suppose to explain this madness? So my sis just goes, "Uh, yeah, sure." LOL But seriously, a) my name could possibly be for either gender, but The BFF’s name is like 110% female to the point that not even Joss Whedon has named a male character this name and b) I love my siblings but I have NEVER looked at them like that and I haven't held hands with them since we were very small children crossing the street. In what world are these two brothers? Incestuously gay twin brothers with girls names, apparently. I wonder if that’s what the cake girl thought. AWESOME FACE CAKE!

Other things that happened over my birthday weekend besides the Jensen n’ Misha Face-Cake...( Collapse )

Fucking good weekend, guys! And thank you all for the wonderful birthday wishes - you people rock!
Collapse