Popping in real quick to say a HAPPY BIRTHDAY to

For you and your love of art, check out this amazing artist, known as The Chalk Man. My dad turned me on to this guy and just...holyfuckinghell. That shit is legit drawn on the sidewalk! 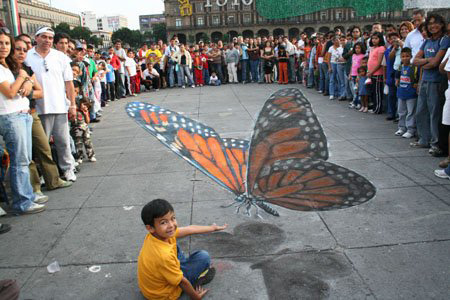 By The Chalk Man, Edgar Mueller

For a whole slew of his pieces, each one better than the last, Go Here.

misslucyjane - who could use a little smile - have this video of a 2 year old and his dad singing The Beatles' "Don't Let Me Down". And also these hugs, darling. /hugs/

In other news, last night I was playing action figures with The Canadian Nephew, age 2, and on the other side of the room my sister was playing with the baby doll and The Canadian Niece. The Canadian Niece kept saying that the baby doll had gone caca (poop) in her diaper. So in the middle of multiple times of The Canadian Nephew having Spiderman get hurt and need a Band-Aid and a hug, he suddenly shouts out, "Spiderman caca his diapey!" Well, I guess sometimes even superheroes have accidents. It's even better because he doesn't simply say the name 'Spiderman', he shouts it out like a battle cry, "Spidermaaaaaan!" - so it's "Spidermaaaaaaan caca his diapey!" Captain America had to clean him up - he is an honor bound man, after all.

Also...Happy Fourth of July and Canada Day and whatever else you've got going on this week!
Collapse