I got up like four hours earlier than normal for Family Easter Breakfast. (Why do these things always have to be at our house?) We usually just have like a half dozen people, all of the family who aren’t married and don’t have other family places to go. This year we extended it a little, to about fifteen people, in an effort to encourage my grandmother to come as well. No one thought she would. She made a big show of telling us she would try but not to count on her. She was worried it would be overwhelming and she would cry. We told her no one would care if she cried and everyone knows she just lost her husband of 70 years, so cry away if she needs to. But Grandma will not stand for crying in front of people. Showing our emotions is taboo. I was raised like that too - your emotions are for private, not the whole world, don’t make a scene. But damn the woman is 88 years old, she can make a scene all she needs too, she’s earned the right!

So we figured she wouldn’t show up - but then she did!! She came for an hour, about half of the allotted time and everyone was so glad to see her. It was fantastic. I am so happy she showed up. Also my mom brought her dog, wearing one of his new shirts, and everyone made a fuss over him. Mom wanted the people who had helped us out during this ordeal to see how good Winston is doing. And also The Boy Cousin is turning fourteen in a few days - (how old does that make me feel? He was my baby boy when he was little and now he’s a foot taller than me). We ran into him last weekend and he asked if we were having cake for his birthday at this thing and we laughed at him. Then we had someone bring cupcakes and my sister put fourteen candles on one of the tiny little cupcakes - (it was ridiculous looking) - and then we all sang ‘Happy Birthday’ to him really loudly and embarrassed the shit out of him. It was lolarious. He will never insist we celebrate his birthday again.

Anyways, I hope all of your Easters and/or Sundays were good ones and I hope you had as nice of weather, wherever you are, as we did here - 70F and sunny!

Here is an Easter card I made! Cuz I think I'm funny. 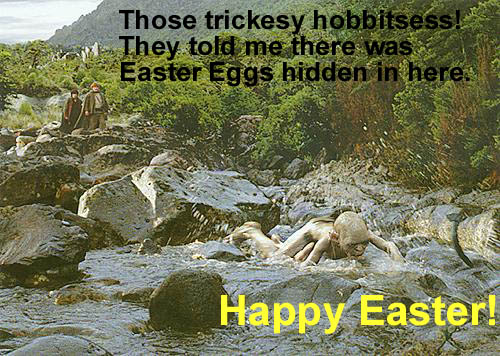 Now I’m off to watch more of The Hobbit: The Desolation of Smaug! As one does for the holiday.
Collapse