I woke up this morning to some bad news - my mother's cat, Whispa, passed away last night. She had been sick for awhile but my mother only realized it this last week and over the weekend the doctor said she was improving quite a bit. But she went last night. Even the vet was surprised by this. She was my cat originally, from the same litter as Buddy and Roo. When I moved out of Mom's house, she asked if she could keep Whispa and she has had her now for almost ten years. It was strange, how when all the sibling-cats lived together, the boys never cared much for each other. Roo and Buddy still don't pay each other much mind. But they all loved Whispa'. She was the princess. She'd spend her days flitting from one boy to the next like a little mother hen. You never knew who you were going to find snuggling with her and sometimes the boys would get jealous of whoever was sleeping with her, because they wanted to have a turn, but they didn't want to share space with their brothers. She was The Sister and they loved her. Since Mom has had her, Whispa slept every night in bed with her. She will be missed. 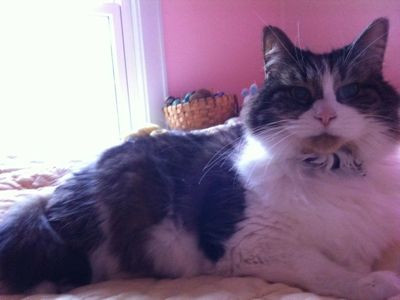 It's been a hell of a year for my family and their pets. Please give your fluffy, furry babies a kiss for me.
Collapse