So, I am finally going to tell you about last Saturday, wherein I met... Jackson Galaxy. That’s right, Jackson Galaxy, renowned cat behaviorist from Animal Planet’s My Cat From Hell. And it was AWESOME!!! He is just as cute, nay cuter, in person and super sweet and omg!!!

My sister’s coworker was all, “Jackson Galaxy is coming to this pet store tomorrow and I am going to meet him,” and my sister was like, “WHAAAT?!” and I was like, “OMG, SO JEALOUS!!” And I told my sister, “I kind of want to go, but I have so much going on in the next week and I don’t feel that great and omg, what would I have him sign? I should skip PT tonight and instead make a wallpaper for him to sign!” And my sister was like, “Or we could just pick up his book and have him sign that,” and I was all, “No, it has to be a picture, so it can go in my autograph book with my Sean Astin and Misha Collins and omg…but we shouldn’t even go anyways.” And Sis was like, “Your excited just thinking about it. It’s the only thing you have going on this week that you actually want to do, so we should do it. And take Hiccup, of course.” So we did. 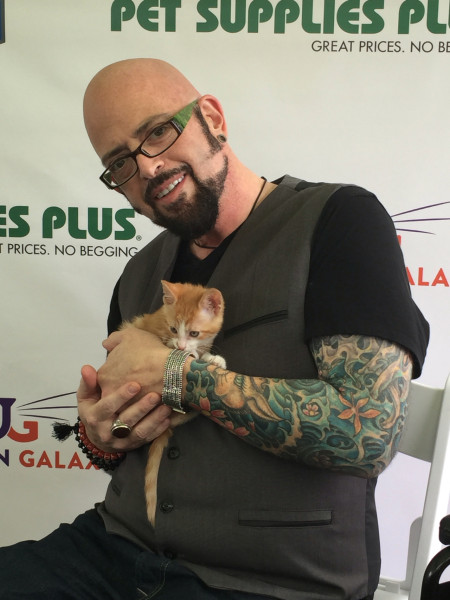 It’s been so long since I’ve done the celebrity/convention thing that I was like super flustered, goodness. Plus, you know, he is the man of my dreams - hot, sweet, pet lover, rockstar, snazzy dresser, tattoos, drives a pink convertible, has a guitar case with a guitar in it and a guitar case with cat toys in it, like omg, I love him. I love him. And now I’ve met him. And I got to show off Hiccup to the world and oh, Hiccup doesn’t know it, but Jackson Galaxy has made his life better. We never would have been brave enough to take a 5 week old, 3-legged kitten if we weren’t armed with all of Jackson’s advice.

That was my weekend last weekend. Throw that in with a specialist appointment and a missed dose of Lexapro - oops - and no wonder I have been down most of the week. But you know what? Totally worth it. Jackson Galaxy is totally worth it.
Collapse