I haven't caught up on comments, even though I told myself I would before I posted again, cuz I have comments from like a month ago, but it is Tuesday, so whatever, I'm making a post! And I promised you guys some baby pics for my 37th birthday post and I finally got those uploaded, so let's do it! Honestly, these are more toddler/preschool pics than baby pics. I think I need to raid my mom's photo albums to get some more baby pics of me - I have surprisingly little considering I was in charge of organizing the photo albums after we moved. My parents got divorced and I took on the project of organizing the albums and dividing up pictures between them. It was before we had scanners on our printers, lol. I knew Dad was too lazy to fight for any and Mom would just keep them all, so for Father's Day that year my little brother and I gave him an album of childhood pics, which he was so grateful for. Lots of pics of us with his parents and at The Farm and on fishing trips with him and stuff. The year after The Nephew turned one, I did a huge-ass project where I scanned in about 800 photos from my parents wedding up to The Nephew's first birthday or so and put them all on disks, so they all had all the pictures they could want.

Anyways, here are some pics of me from my photo box 'pre-kindergarten' section. I love the one where I have the red sweater wrapped around my shoulders, I look so chill and cool, like I'm just chilaxing. (I cut my sister and cousin out of it, but they were there too, feeding the goats. My aunt and uncle kept goats my whole childhood and I loved when they had baby goats to feed.) The one with the redhead whose back is to the camera is my big brother. We're eating from the nut bowl. He would crack them for me because I couldn't do it myself. The baby in the other picture is my little brother and that blanket is seriously like my favorite blanket of my life. 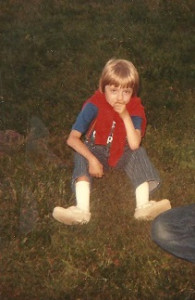 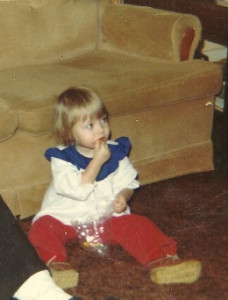 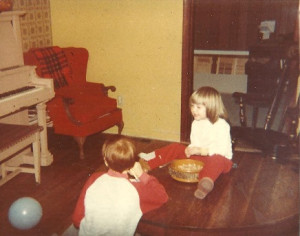 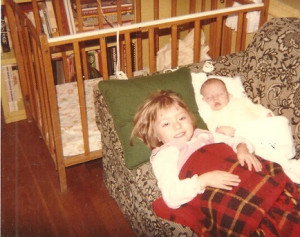 Maybe for my next birthday, I'll post some elementary school pictures. I was pretty cute even then!
Collapse