I'm getting tired of making these posts. I shouldn't be making another post like this so damn soon. I'll tell you a story though - I think the first thing I ever saw Alan Rickman in was Robin Hood: Prince of Thieves. Now my mom was really into Kevin Costner and I, myself, couldn't have been more than 13 at the time and I remember saying to her how I was rooting for the Sheriff of Nottingham, because Robin Hood was kind of lame and the sheriff was sexy and had a cool voice and idek what all. But what I do know is that my mom got so mad at me. She wanted to talk about that movie for days and all I wanted to talk about was the sheriff and she would get so incensed. I had the same reaction when I saw Die Hard on VHS later that year and my brother was like, "But he's a terrorist," and I was all, "But a hot terrorist."

elfscribe5 put up a post about Galaxy Quest and you know, there is a moment with his character towards the end that legit makes me cry every time. If you've seen the movie, you know the part. Alan Rickman carried emotion in everything he did, even when playing an actor playing an alien fighting alongside real aliens. From Die Hard, Galaxy Quest, Quigley Down Under, Rasputin, Love Actually, Harry Potter, Dogma and everything else I ever saw him in, Alan Rickman carried himself with fucking class and style. And no one, ever, will have a voice like that again.

"It would be wonderful to think that the future is unknown and sort of surprising." - Alan Rickman 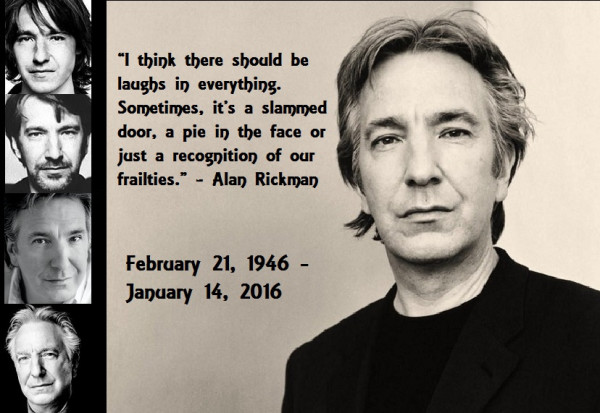 Graphic by me. Images from the internet.

So raise your wands. Light 'em up. For Alan.
Collapse