Dismal Halloween this year. So cold, like 35F, windy af, wet. And then halfway through trick-or-treats, around 7, it started snowing. Ugh. Last year we had 150-200 kids. This year was 15-20 kids. And for some reason Sis bought a bag of candy where half continued nuts - which isn’t a good idea anyways since something like 40% of kids these days have nut allergies - but I hate things with nuts in them (I like nuts, I hate biting into something & having pieces of something else inside, idk, I’m weird about it) & Sis is watching her sugar intake, so like half the giant bag of candy ended up going into her office even though everyone there was like, “No don’t bring candy into the office,” a policy I think Sis actually started! Anyways I sat in the big picture windows in my outfit, but only one person noticed and it was a dad, though at least he thought I looked cool. Bummer night. 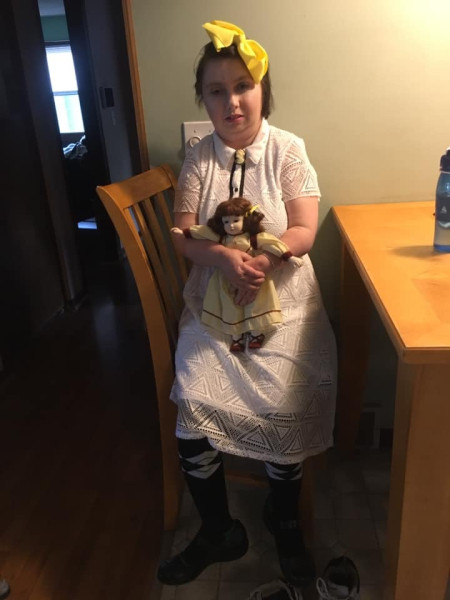 Though my costume was sweet!

But...the weekend before Sis, BFF & I had taken The Niece to her first convention! (Her brother is mad she got to a con before he did, even though his first con will be a comic con and this was just a family Halloween convention, there were lots of cosplayers there though). There was a Killer Car Show, which I was psyched about. There was free candy at every booth almost, which TN was psyched about. I ran into an awesome cool vendor I met this summer at the Festival of Oddities (you may need pics from that at some point to fully understand the crowd and the fare at something called Fesival of Oddities). I may be nursing a small crush on her, plus her art is amazing. The League of Justice cosplayers were there, a charity group that cosplays at events & runs to raise money for various things, and does children’s hospital visits etc. Their Joker let the children kill him over and over and was just as dramatic about it as Joker would be. Though TN was way more blown away that she met Poison Ivy and then Ivy saw her later and called her by name, “Hi, Jojo!” and waved as she walked past. No, that’s not TN’s name but the night before we took her to Target and she got a JoJo Siwa costume, some kids’ popstar I’ve never heard of. But a couple other kids there noticed her costume and shouted, “She’s Jojo Siwa!” and TN was maybe the proudest she’s ever been in her life. “They might think I’m the real Jojo Siwa!” She made everyone call her Jojo all day. They also had a simulation of the Monsters Inc scare training room, that TN & Sis did together to practice scaring kids in their beds like the MInc characters. They had a recreation of the Greedo scene from Star Wars where you played Han Solo’s role...I am forbidden from showing you the video of Sis doing it. There was a magician that had all the kids gathered around his booth while he did tricks. There was a creature creator creating on the spot.

It was lots of fun. I dressed as a creepy little ghost girl with her creepy little doll, and this zombie lady, who was one of the heads for the zombie walk taking place the next day, literally, I mean literally, begged me to come back for the walk. “We need you and this costume tomorrow!” I mean, look at her makeup and outfit? I was honored someone with this skill level liked my outfit. I didn’t wanna kill her buzz by telling her we couldn’t come back because we had my uncle’s memorial the next day.

Anyways, it was an all around fun Halloween convention. I heard about it on FB last year after the fact, so I’d been waiting all year for it. It was worth the wait and even better for taking TN. Hope your Halloweens had better weather than mine, or at least that you got to a fun convention!

This entry was originally posted at https://dodger-sister.dreamwidth.org/254898.html. Please comment there using OpenID.
Collapse